Тhe metal cores for preparing the seals were first cast in ceramic or stone moulds. These moulds were fitted with circle shapes to make “prеliminary” seal cores. During casting, a cordhole was made through its core, so that a cord could be thread through and circle around the rolled document or scroll. The final stage of making the seal was to mould it with a special pair of pliers called a “Bulotirion”. Special matrixes or “relief moulds” were fastened on the sides of the pliers with signs and images engraved in negative. The Bulotirion would then be hammered thereby creating a positive relief on the seal.

THE PRESLAVIAN MEDIEVAL SEAL COLLECTION is one of the largest collections ever discovered “in situ “ during an excavation. They were found in their original position at the Administrative Building site in the Palace Center. There were more than 500 Molivdovuls (lead seals) found, as well as more than 200 lead cores and moulds. Since the seals are mostly Byzantine in origin dating from 971 to 1088, it is likely that the representatives of the Byzantine government used this building as the administrative center after conquering the town in 971.

Added to this large collection are seals from other excavations. There is a vast collection of seals from Bulgarian and Byzantine rulers along with many other important dignitaries. They were found in the inner and outer towns of Preslav as well as the local surroundings. This shows that there was regular correspondence between the Bulgarian and Byzantine courts, not only during the period when Preslav was a capital, but also before 893. During the pre-capital period, Preslav was a vital hub for the developing administrative structure as well as a large military station.

Moulds for casting seals from the Strategy in Preslav 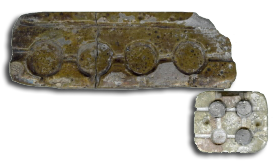 Тhe metal cores for preparing the seals were preliminary cast in ceramic or stone moulds with circles carved in them. When casting the seal, a cordhole was made through its core, so that the cord could circle round the rolled document or scroll.

The final stage of making the seal was to form mould it with a special pair of pliers called "bulotirion " Special matrices were fastened on the sides of the pliers with signs and images engraved in negative relief. 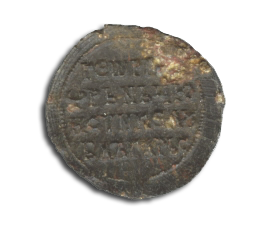 It was found in the vicinity of Selishte (The Settlement).

Sinkel was a high-ranking clergyman - the archbishop’s first assistant. It is highly probable that the owner of the seal and Archbishop George, who became the head of the Bulgarian church at the end of 9th century, were the same personality.

The two copies of the molivdovul (the other is in the collection of the National Archeological Museum in Sofia) are the first and earliest memorials written in the Cyrillic alphabet. 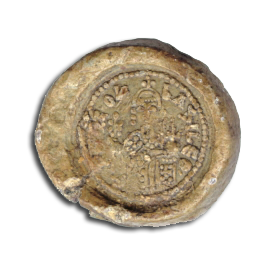 The seal was found near a village called Cherencha in the region of Shumen. The circular sign saying “Simeon the Basileus” suggests that the molivdovul dates to some time after the coronation of Simeon as Tsar of Bulgaria in Constantinople in 913.

Protovestiarius was a dignitary in the palace of the Byzantine Emperor. He managed the emperors personal wardrobe and assisted him everywhere even in his military campaigns. Тhe protovestiarius was also responsible for the personal tasks and work of separate individuals of the emperor’s family. According to historical resources, Teofan had the leading role in settling the marriage between the Bulgarian tsar - Petar and the Byzantine princess - Maria-Irina (the granddaughter of Emperor Romanus I Lakapenos). This fact explains why seals of his own set were found in Preslav. 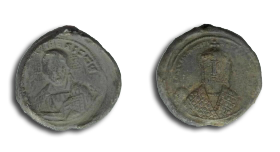 Location - in the vicinity of “Pod Zabuite” ("Under the Teeth" The teeth are the hill that protects and forms the Southwestern boundaries of Preslav)- near the Emperor’s palace.

Judging from the fact that Constantine VII was presented alone, we might assume that the molivdovul dates to 945, the year when the Lakapene dynasty was removed from the throne. All the mail from the Emperor, received in Preslav, probably detailed these changes in the Byzantine government. 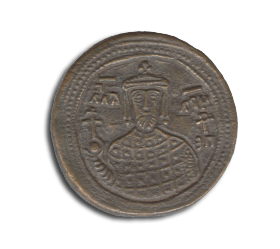 The matrix was meant for printing on soft materials (wax, clay).

The inscription was written in Cyrillic on both sides of the image. This is the earliest notation in which we see the Bulgarian equivalent of the Byzantine title - basileus that is tsar or caesar.

The title “domestic” means a higher-ranking officer in the Emperor’s army. The seal belonged to the future Byzantine Emperor Alexios I Komnenos (1081-1118). In 1079 he was honored with the title “sebast”, which was reserved for the emperor’s family only, as well as for their close associates.

Some of the seals make it easier to track down the carrier of their owners. The same is the case with the 5 molivdovuls of Basil the Head. Judging from them, we might assume that he first was a spataroipat (a rank lower than patrician) and a few years later he reached the rank of vestarh, which was second in rank for eunuchs. The duties of the vestarh mainly consisted of managing the personal wardrobe of the emperor - he took care of the official garments, crown, and jewelry.

Theodore Dobromir’s carrier could also be tracked according several of his molivdovuls.

The curious thing about this Byzantine dignitary, however, is his Slavic origin, which is obvious from his surname. This proves to be one of the numerous illustrations for the political nature of the Byzantine administration.