The Goths and Aula near the village of Khan Krum

At 12 km from Preslav, four early antique churches from the second half of the 4th-5th centuries have been discovered within the Early Middle Age (aul) built in 822. They precede the construction of an aula about four centuries ago. One of the churches is richly frescoed. Fragments of frescoes with images of saints and elements of Christian symbolism are found in it. Inside and within the churches, graves belonging to local community leaders were explored. In them were found jewels made of gold, gilded silver and semi-precious stones. The comparative analysis of these finds shows that they belong to the style of the Gothic art of IV-VI century. They find parallels among the monuments of the Crimea, the Northern Black Sea coast, the Danube Roman provinces, Italy and Spain, where the Goths lived at various stages of the Great Migration era. The decorations from the Khan Krum village date from the second half of the 4th century to the end of the 5th century and reflect the different stages of Gothic migration on the territory of present-day Bulgaria: the arrival of the Christianized Arianas, led by Bishop Vulphila in c. in the 4th century, the passage of the visigoths to the south of the Danube River (after the Hunan invasion of 375-376) and the ostrogots who had freed themselves from the power of the Huns after Atylas death in 453. In comparison with the written sources the intensified preaching and enlightenment of bishop Vulphila (about 311-383) and his disciples, the finds from the village of Khan Krum testify that there was one of the spiritual centers of the Gazi-Aryan missionaries. It originated in the second half of the 4th century (probably still alive by Bishop Wulfilla) and existed until the end of the 5th century.

On the brink of the new era a migration process for many Eurasian tribes started from north to south and from east to west toward the borders of the Roman Empire, mainly due to the beginning of the climate changes. The culmination of this process, called by the historians the Great Migration, started with the invasion of the Huns in Europe in 375 AD. As a result of it, hundreds of thousands of Goths, Vandals, Alans, Sarmatians, Taifals, Gepids, Burgundians and other tribes were forced to travel thousands of kilometres searching for a new place to live in. In the 5-th century the German “barbarians” (as they were disdainfully called by the Roman historians) captured Rome and laid the foundations of Mediaeval Europe.

Some of the most active participants in those events were the Goths. Thanks to the Bible, translated in the 4-th century by bishop Ulfilas, we know that Gothic language was one of the East Germanic languages. According to the story of Jordanes, written in the middle of the 6-th century, the Goths came from the mythical northern island of Scandza, located opposite the Vistula river (today in South Sweden (Gotaland region and the island of Gotland). Though not all scholars agree with the hypothesis for the Scandinavian origin of the Goths, their appearance on the South bank of the Baltic Sea, in Eastern Pomerania and the lower course of the Vistula River (nowadays Northern Poland) in the 1-st century is archaeologically supported. In the 2-nd half of the 3-rd century they travelled south-eastward along the Vistula river toward nowadays South-western Belarus and Western Ukraine. Toward the middle of the 3-rd – 4-th century they already inhabited the vast territory between the North Black Sea region, the Don River, the Carpathians and the lower course of the Danube River. Along their long way to their new lands, the Goths chased, subdued and united with different ethnic groups. In the second half of the 3-rd century the Goths divided into eastern Goths (Ostrogoths, Greutingi) and western Goths (Visigoths or Thervingi) and defined the Dniester River as the border between them. The Ostrogoths also inhabited the Crimea and the Taman peninsula. Goths made multiple plundering attacks in the Balkan and Anatolian provinces of the Roman Empire from their new lands. In one of the battles against them, in 251, the Roman emperor Trayan Decius and his son and co-ruler Herennius Etruscus were killed near Abritus (nowadays called Razgrad). It was not until year 269 when Emperor Claudius managed to overpower the Goths near Naissus (nowadays Nis) and temporarily put an end to their attacks. Many of the captivated Goths (320 thousand according to Jordanes) were sent as slaves and semi-dependent villagers (colonies) in nowadays Northern Bulgaria and Dobruja. In 271 the Goths were defeated by Emperor Aurelian in todays Muntenia (Romania). Yet, he was forced to evacuate the Roman garrisons in Dacia province and the Visigoths settled there. In 4-th century the Gothic invasions aimed at permanently inhabiting the territory of the Roman Empire which attracted them with its opulence. In 322 Emperor Constantine the Great sighed a peace treaty with the Visigoths making them allies of the empire (federates) and obliging them to protect its borders and serve in the Roman army. In order for this to be accomplished, many Goths settled along the south bank of the Danube River. The contact with the culture of the Roman Empire which recognized Christianity as an official religion with the Edict of Serdica (year 311) and Milan (year 313) sped up the process of converting the Goths into Christians. This religion was first introduced to the Visigoths. Their religious leader Bishop Ulfilas (around 311-383) was to be thanked for it as he preached one of the most ancient teachings in the Christian religion – Aryanism (declared a heresy but extremely popular in the 4-th century). In 348, the baptised Goths who adopted Aryanism led by bishop Ulfilas came in today’s Northern Bulgaria due to the fact that in their country they had been severely hunted by their pagan fellow tribesmen. With the permission of Emperor Constantine II (337-361) they settled around Nicopolis ad Istrum (today’s village of Nikyup, Veliko Turnovo area) in the foot of Stara Planina Mountain. There bishop Ulfilas created an alphabet and translated the Bible into Gothic language. Nowadays a duplicate of the Bible from the end of the 5-th and the beginning of the 6-th century – the so-called Codex Argenteus, is kept in the University Library of the city of Uppsala (Sweden).

When the Huns defeat the alliance of the Ostrogoths in the Northern Black Sea region in 376, Visigoths went beyond the Danube River and upon receiving permission by Emperor Valens settled in the Roman provinces of Scythia Minor (today’s Dobruja) and Lower Moesia (the central part of today’s Northern Bulgaria). In the years to come the arrival of the Ostrogoths and Visigoths in the Roman provinces south of the Danube River continued. Hunger and willfulness of the Roman officials served as a reason for the break of the Goths’ revolt. In 378 close to Hadrianopolis (today’s Edirne, Turkey) they defeated the Roman army and Emperor Valens died in the battle (364-378). The next emperor Theodosius I (379-395) was forced to sign a peace treaty with them in 382. He gave them the statute of federates (being one people, not separate tribes) in exchange of the duty to serve in the Roman army. They were allowed to settle in Lower Moesia and part of the Dacia Ripensis (along the South bank of the Danube River). There the Goths who practiced Aryanism had certain autonomy. At the end of the 4-th century they chose Alaric of the noble Visigoth kin of the Balts to be their first king and after a long campaign through the Balkan Peninsula they headed to Italy and conquered Rome in 410. Being a Christian, Alaric did not destroy the Christian churches. In 418 his successors established the Visigothic Kingdom in the territory of today’s South France and Spain and it existed until the beginning of the 8-th century when the Moors utterly defeated it. When Atilla died (year 453) and the tribal alliance of the Huns fell apart, part of the Visigoths who lived in Pannonia under the dominance of the Huns, returned to the Balkans. Around 474, Theodoric became their king and established his residence in the town of Nove (close to today’s town of Svishtov). During his reign, the Goths started military campaigns in the Eastern Roman Empire. Emperor Zeno managed to convince Theodoric to attack Odoacer in Italy, who seized the power over the Western Roman Empire in 476. There, in 493, Theodoric the Great established the Ostrogothic Kingdom whose capital was Ravenna. The Kingdom existed until 554 when the Byzantine Emperor Justinian took control over it.

The latest evidence regarding the existing of the Goths date back from the middle of the 16-th and the beginning of the 17-th century and concern the Crimean Goths who stayed in the Black Sea mother country of the Ostrogoths. In the following centuries they were assimilated by the surrounding population of Tatars. 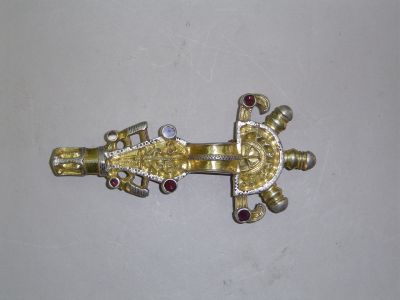 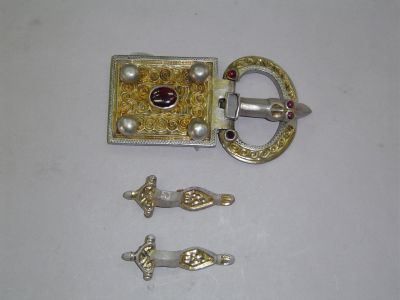