The second capital of Bulgaria in the IX-th century, Preslav is blessed with an unique and extremely strong tourist resource - the Archaeological Reserve of the Ancient Capital and the modern museum. They can be used and enjoyed by the professional archaeologist and the holidaymaker.

The town has convenient road links, as it stands at 20 km away from the regional center of Shumen and at 25 km from Targovishte. Access from the South through Stara Planina provides Rieska and Kotlenski Pass, whose roads are in good condition. Besides by road, you can also get to Preslav by train from Sofia, Varna or Ruse by going to Shumen Station or Targovishte Station (more inconvenient option). From Shumen you can use a bus or route tax at approximately the same price.

WARNING! The Varbishz pass is closed for all types of vehicles.

Location of the Archaeological Museum

The official entrance of the Preslav Museum is located on its eastern side, on the alley passing by the towns cemetery. Here is the most convenient to park your car or bus, due to the immediate proximity of the antiquities and the possibility of panoramic view of the entire archaeological reserve.

What will you see in the museums exhibition? Here are all significant monuments from medieval Preslav, among which the jewels from the Preslav gold treasure, the ceramic iconostasis from the Palace Monastery, a copy of St. Teodors monumental icon and other valuable pieces of painted ceramics, numerous ancient inscriptions, a unique collection of lead stamps. There are also displayed hundreds of artifacts, testifying to the daily life and the economy of the old inhabitants of Preslav.

A short walk through the ruins: The huge area where the metropolitan city was located (3.5km) requires a full day of crawl, so the tour guide always represents a considerable difficulty in offering an optimal route to tourists. Heres one of the possible:

From the parking lot in front of the museum, head down the main driveway. Approximately 300 meters ahead of you, the northern gate of the inner city, called by the old preslavians "Iron Gate", will be set in its massive shape. This name in the Middle Ages usually received the main gateway to the city, but we did not exclude the contribution to the confirmation of this nickname to have the numerous battles that took place in this part of the Preslav fortress. Passing through the gate, you will find yourself in one of the most peaceful and cool places not only of Preslav but also of the whole countryside - a hundred year old pine forest, with a convenient parking, gazebo and spring water. Here are located the monastery "St. Cyril and Methodius", built on the occasion of the 1000th anniversary from the death of Metodius and King Simeon and the building of the Archaeological Base at BAS. Following the path leading to the palaces, just after the Base, you will cross an angular round tower from the Early Aul wall. To the east lie the remains of two of the most prescient Preslav churches, as well as a passage from the fortress wall, the base of which will see many graffiti - drawings and inscriptions. Reaching the end of the trail you will cross the modern road to get right in front of the ruins of the Preslav Palace, where archaeological research is still ongoing. South of the Royal Palace Building you can see a complex of buildings, an impressive basilica and a luxurious bathroom, belonged to the Preslav Patriarchy according to the investigators. Cross the square, east of the bathroom, before you will be revealed the building with the furnaces and a massive building - the so-called Administrative building. Over 500 lead stamps, cores and molds for their casting have been discovered for several archaeological seasons - finds that form the worlds richest cluster of archives discovered under similar circumstances - documented, scientifically analyzed and presented to the general public.

Turning southward, your attention will be attracted by the proud stance of the restored South Gate, from which you can take a look around the surroundings. To reach the ruins of the popular Round (Golden) Church, continue along the lane to the south, passing by a small church in the middle of which well traces of Proto-Bulgarian pagan capitals are well preserved. Opened in 1927 by the teacher - archeologist Jordan Gospodinov, the distinctive temple of the naos and the original architectural solutions, continues to admire the specialists and lovers of history. Today, as perhaps a thousand years ago, the Round Church has sunk in greenery and tranquility - the spring water will refresh you, and the shade and aroma of the century-old pines will restore your strength. Here you can bring a flower to the grave of Jordan Gospodinov - this tireless explorer of the Preslav past, whom many compare with the enthusiastic Schliemann. A tourist information center was opened in the chalet next to the church in 2007, where you can buy tickets for the entire complex and get a guided tour. If, after this long walk, the fatigue has not yet overcame your curiosity, you can descend into the plain where you can see the walls of a huge complex of buildings and churches. This is the settlement of Selishte, published in the 10th century, from the everyday life of feudal mansions, monasteries, and perhaps state institutions. 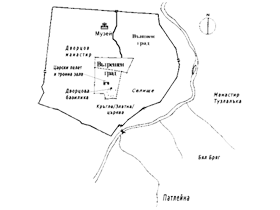