There are immovable monuments exhibited in the exposition room of the Archeological Museum "Veliki Preslav" showing connection to three main periods in the town history:

Until the day when real archeological research was started, historians believed that Preslav was built around 893 and that it took tsar Simeon 28 years to finish it. However, many new facts and discoveries have changed the initial ideas of how the town was once founded. Two of these finds are: examples of proto-Bulgarian ceramics and several pagan shrines and buildings lying right below the buildings from the Capital city period. Experts analyses point out that the first building there probably dates back to the time of khan Krum and khan Omurtag - supposedly, the first quarter of the 9th c. Actually, three inventory signs on marble and granite columns take us back to the first historical days of Preslav. The conclusion we could arrive at is that this was the place where ichirguboila,the kings adviser and the second best warrior, resided along with other high-ranking officers. It is also clear that they possessed a number of different weapons and ammunitions. Judging from all that, we could claim almost certainly that Preslav was built as a military aul. This probably happened after the war which khan Krum led against Byzantium in 811. According to the historical sources, Bulgaria won the war, but with too many civilian casualties and a capital ravaged and burned down. 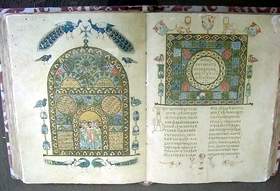 Veliki Preslav - the second capital of Bulgaria - was delegated the mission to take Bulgaria all the way to Christianity. This historical moment, however, helped create a favourable atmosphere for another phenomenon to occur - a phenomenon that could be observed only in the biggest cultural centres in the world. This phenomenon was the adoption, development, and fervent defence of the Slavonic alphabet, created by Cyril the Philosopher and his brother - Methodious. After their defeat in Moravia and the destruction of all their decades of hard work, some of the most promising and prominent students found shelter and protection in Bulgaria. The new prince - Simeon, was highly educated and already knew the Slavonic "Az, Buki..." ("A, B, C ..."). He vigorously devoted himself to incite and inspire a certain circle of literary men, translators and teachers. For a very short period of time in Preslav, there was established an imposing library consisting of translated books - clerical and secular in essence, as well as original works by John Ekzarh, Chernorizetz Hrabar, and Constantine Preslavski (photo/ book). Contemporaries tend to compare Simeon with Ptolomeus - the founder of Alexanders Library. Today we refer to this outflow of knowledge and literary progress as the Preslavian Literary School. Its powerful influence can be proven today through the wide spread usage of the Cyrillic alphabet in the Slavonic world. Simeons library was robbed and destroyed, yet tons of written substantiations have reached us. Due to the archeological excavations, many inscriptions cut in stone, plaster, ceramics and engraved on slabs, became known to the scientific world. All these items represent one of the most precious Epigraphic collections that is actively, and strictly, preserved in the Preslavian museum.

The archeological excavations of Veliki Preslav led to the discovery of many dwelling premises: shrines, a monastery, civil housing -sites, administrative and ceremonial buildings. The archeologist sometimes needs only the architectural plans of the building in order to define what purpose it previously served. More often, however, an extensive analysis is needed regarding all movable objects connected to the resident’s lives, agricultural activities, and lifestyles. Hundreds of exhibits in the halls of the Archeological Museum - "V.Preslav" depict this part of the old capitals history, which is closely connected to the everyday life of its citizens. A lot of jewelry can be seen there: rings with various signs, copper, bronze and silver earrings and bracelets, as well as items made of glass, amber and other kinds of minerals. You will be deeply impressed by the exquisite relief on bones, metal, and clay; as well as  the precise workmanship of the breast crosses, amulets, and belt decorations (photo/ window display above. In the front, crosses and a silver cup). You will be charmed and enchanted by the agricultural and craftsmen tools which are still functional to this date.There is also a rich collection of ceramic utensils: amphoras, earthenware pots, and cups and bowls, which were either produced there or imported from Byzantium (to the right, photo of amphoras). All these items, the so-called regular army for every exposition, represent the everyday life events and habits. Athough they are not considered to be treasure, these items tell us more realistically the true stories of the past than any other original copies can show or proove. 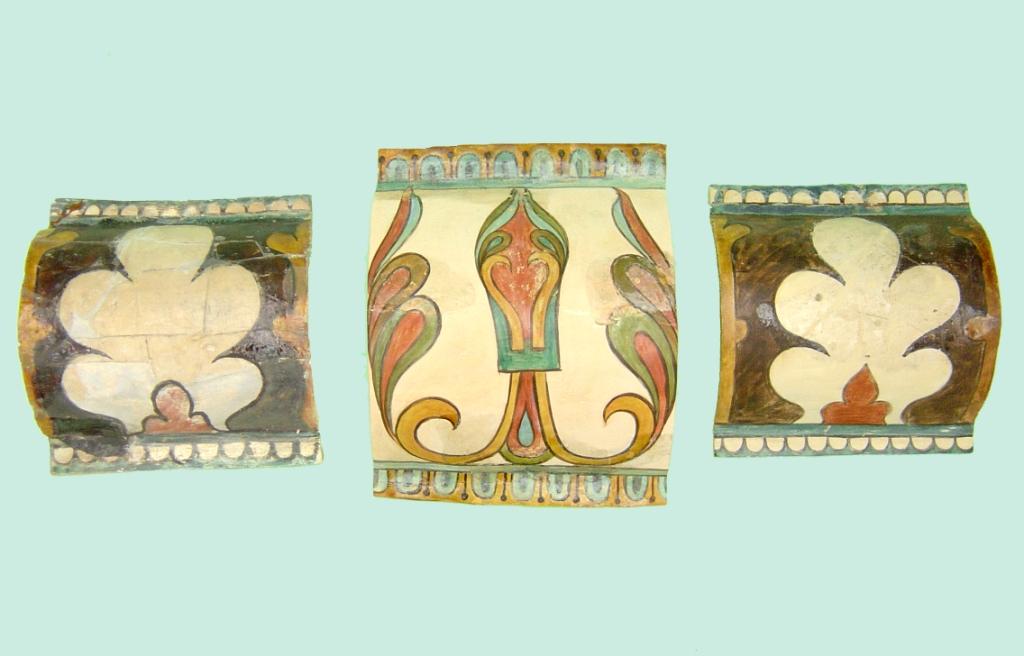 In 1909, when the Preslavian teacher, Jordan Gospodinov, launched the excavations in the region of Patleina, (to the south from the Ruins), his only idea and desire was to refute the claim that Preslav had nothing to offer that could be of scientific interest and importance. Chance was in his favor when that very year he announced the discovery of a very interesting and original type of slabs made of fine white clay. They were covered with colorful ornaments and varnish, and often, lettering. In due course, a monumental icon of St.Theodore was pieced together. At this time, all around the world, rumors and discussions about the Preslavian findings started. The wide-spread opinion was that all the findings must have been imported from Byzantium, since that was the only location where studies had shown these types of works produced. As excavation works in Preslav continued, however, similar studies were discovered where such fine art production was once made. The crucial contribution for these discoveries belongs to Iv.Zhandova, an experienced acheologist from Preslav, who was the guiding figure in pursuing additional excavations. During the 1970’s and 1980’s, T.Totev, the doyen of Preslavian researches, discovered two new centres of painted ceramics. He also made  additional research into the well-known and studied sites in Patleina, and near the Round Church. Thus was completed the entire picture of this unique artistic phenomenon of Preslavian painted ceramics, from it’s dawning to it’s decline.

After nearly 80 years of flourishing as the Bulgarian capital, Preslav reached its decline. Shortly after the devout tsar Petar died in 969, the Byzantine diplomacy undertook a long campaign aimed at diminishing the power of its mighty rival to the north and to whom it had paid annual taxes to for over half a century. The powerful Kiev royal prince Svetoslav was promised riches to plunder which only enticed his imagination, and he easily became a faithful ally to Byzantium. According to some chroniclers, he marched south into northeast Bulgaria with an army of 80,000, where he easily conquered due to the lack of resistance he encountered from an immature political ruler. Soon afterwards, he also managed to invade the capital, Preslav (from 969 to 970). Now the road to Bulgaria was cleared for the unrivalled commander, John Tzimisshi, who was quite recently proclaimed Basileus of Constantinopolus. On Easter in 971, his army made a surprising and unexpected manoeuvre which led him straight under the fortress walls of Preslav. The defenders of the town were unprepared for the attack and unpremeditated fires broke out. The royal family was captured and the great capital was completely ravaged in just a few days. For a long period of time Preslav’s role was a secondary one as the centre of Byzantine administration and highest in rank among Bulgarian bishops. Athough Preslav lost its shine as a capital, it was still proudly called Veliki Preslav (Great Preslav). There are many objects that serve as a proof regarding the wealth of the citizens in this capital city: items of luxury, finely made ornamental utensils, frescoes, and coins, to name a few. The image of the Archangel on frescos, which according to researchers date back to the last quarter of the 10th c., will attract you with their skillfully combined pastel hues, and the well-preserved jewels along with the moulds for their manufacture, you will find impressive. As to the ceramic utensils, they illustrate not only the fashionable trends, but also the tradition in white clay processing. Two window displays with specialized and thematically organized items occupy a special place in the exposition because they represent the entire period of existence of the town starting from the 9th c. and ending in the 13th c. These weapons and coins certify the times of peaceful economic growth, as well as the times of severe battles defending it. 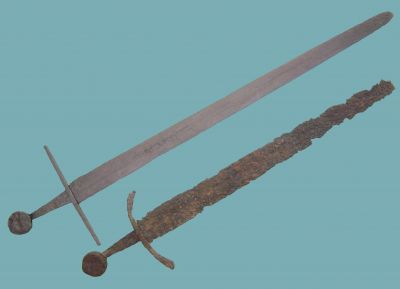 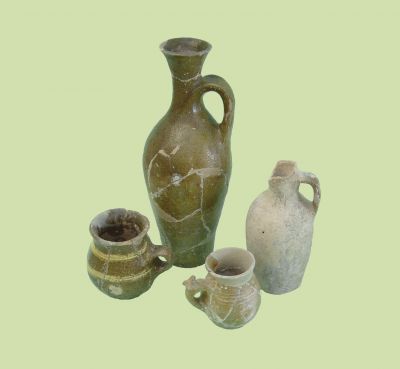